As a “Prophet of God” Joseph Smith’s prophecies repeatedly failed. Why did David Patten die before he fulfilled his mission.

The Lord warned about false prophets who would speak in His name.  And He gave us a way to test a man to know if he is a true prophet of God, or not.

In Deuteronomy 18:22 “When a prophet speaks in the name of the Lord, if the thing does not happen, or come to pass, that is the thing which the Lord has not spoken, but the prophet hath spoken it presumptuously: thou shalt not be afraid of him.”

Let’s take a look at another prophesy Joseph Smith made and how it turned out.  Joseph had been experiencing financial trouble.  The illegal Kirtland Bank he set up had failed completely, almost as soon as it had opened for business.  Members of the Church were beginning to lose trust in him, and Smith was forced to excommunicate several of his top leadership.  But Joseph had confidence in 38-year old David W. Patten, one of the original twelve apostles, who was very loyal to Mormonism.  Patten must have seemed a safe bet for Smith to have the Lord prophesy about.

The prophecy is in Doctrine and Covenants, Section 114.  The heading says, “Revelation given through Joseph Smith the Prophet, at Far West, Missouri, April 17, 1838.”  Verse 1 “Verily thus saith the Lord: It is wisdom in my servant David W. Patten that he settle up all his business as soon as he possibly can, and make a disposition of his merchandise, that he may perform a mission unto me NEXT SPRING, in company with others, even twelve including himself, to testify of my name and bear glad tidings unto all the world.”

So, speaking for the Lord in 1938, Joseph Smith prophecies that David Patten in a year from then would perform a mission, that would have been fulfilled in the spring of 1839.   The problem was that Patten was killed on October 25, 1838, at the Battle of Crooked River – six months before he was supposed to go on his mission.

Some might try to defend this prophesy of Joseph Smith by saying that Patten’s unworthiness thwarted the plan of God.

But hear what Joseph Smith said about him at the funeral – recorded in History of the Church, Vol. 3 p. 171, “Brother David Patten was a very worthy man, beloved by all good men who knew him.  He was one of the Twelve Apostles, and died as he had lived, a man of God, and strong in the faith of a glorious resurrection, in a world where mobs will have no power of place.  One of his last expressions to his wife was – ‘whatever you do else, O! Do not deny the faith.’”

Surely, God would have known Patten would be killed six months after the revelation had been given.  And not have been silly enough to predict an event that was never going to happen.  Or, does the Lord NOT know everything past, present, and future after all? 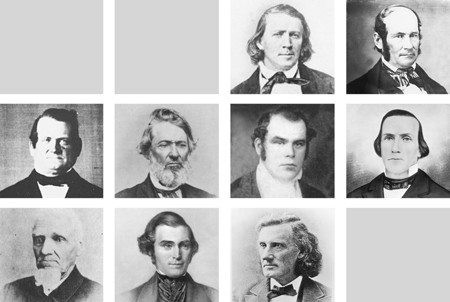 The Quorum of the Twelve 1835 Mission

Latter-day Saints have to remember the promise of the Lord as recorded in their own scripture.  Written on November 1, 1831 as an introduction to the Doctrine and Covenants;

“Search these commandments, for they are true and faithful, and the prophecies and promises which are in them shall all be fulfilled.  What I the Lord have spoken, I have spoken, and I excuse not myself; and though the heavens and the earth shall pass away, my word shall not pass away, but shall all be fulfilled, whether by mine own voice or by the voice of my servants, it is the same.”

Here we have a claimed statement from the Lord that there are no excuses.  And the prophecies and promises made by Joseph Smith on His behalf will all be fulfilled.

So far, none that we have encountered have remotely come to pass.

Since Joseph Smith failed repeatedly in his ability to function as a legitimate prophet of God, he is to be forever seen as one who speaks presumptuously for the Lord and is in reality, a false prophet.