Introductory Pages of the Book of Mormon – Part 1

The first page we want to look at is the Title page, which was written by Moroni and translated by Joseph Smith, Jun.  It reads: It states that the Book of Mormon was “written to the Lamanites, who are a remnant of the house of Israel; and also to Jew and Gentile.”

Then mentioning the purpose of the Book of Mormon, it says, “And also to the convincing of the Jew and Gentile that JESUS is the CHRIST, the ETERNAL GOD.” That statement confirms that Jesus Christ is in fact, GOD – as Joseph Smith was monotheistic in his beliefs when he wrote it or translated it.  Now you ask any Latter-day Saint – “who is Eternal God?” – and they will tell you that Eternal God is Heavenly Father.  Whereas here on the Title page it says Jesus Christ is “the ETERNAL GOD.”

What does the “fulness of the everlasting gospel” mean anyway?  The Apostle Paul described it in 1 Corinthians 15:1-4 “Moreover, brethren, I declare unto you the gospel which I preached unto you, which also ye have received, and wherein ye stand; By which also ye are saved, if ye keep in memory what I preached unto you, unless ye have believed in vain.  For I delivered unto you first of all that which I also received, how that Christ died for our sins according to the scriptures; And that he was buried, and that he rose again the third day according to the scriptures.”

In contract, here is the gospel as described by LDS Apostle Bruce R. McConkie: “The gospel of Jesus Christ is the plan of salvation.  It embraces all the laws, principles, authorities, and keys necessary to save and exalt men in the highest heaven hereafter… the gospel is concerned with those particular religious truths by conformity to which men can sanctify and cleanse their own souls, thus gaining for themselves salvation in the eternal worlds.” – Mormon Doctrine, pg. 331.

The Third Article of Faith says: “We believe that through the Atonement of Christ, all mankind may be saved, by obedience to the laws and ordinances of the Gospel.”   We see that the gospel preached by the Apostle Paul didn’t have a single law or ordinance mentioned in it.  Paul warned about those who would attempt to distort the good news of the gospel.  Galatians 1:6-8 “I marvel that ye are so soon removed from him that called you unto the grace of Christ unto another gospel: Which is not another; but there be some that trouble you, and would pervert the gospel of Christ.  But though we, or an angel from heaven, preach any other gospel unto you than that which we have preached unto you, let him be accursed.”

When you add “laws” and “ordinances” to the gospel, you’ve just turned the good news into bad news because – no one ever got saved through keeping laws and ordinances as scripture makes clear.  Paul taught in Romans 3:20 “Therefore by the deeds of the law there shall no flesh be justified in this sight: for by the law is the knowledge of sin.”

The Introduction goes on to state concerning the Book of Mormon that “After thousands of years, all were destroyed except the Lamanites, and they are among the ancestors of the American Indians.”  You will find in the Book of Mormon that there are no direct references to any non-Israelite people in the New World during the timeline covered by the book.  To complicate things, the Church of Jesus Christ of Latter-day Saints has been confronted with a serious challenge to its truth claims.  Comprehensive DNA surveys of Native Americans and Polynesians have failed to find any genetic markers or any evidence of pre-Columbian Hebrew migrations into the New World or Pacific Islands.  Scientists see no genetic or cultural connection between Native American and Polynesian people and ancient Hebrew people.  Scientists are certain that the American Indian ancestors migrated from Siberia on the Eastern Asia Continent to the North American continent.  As evidence steadily accumulates against the Book of Mormon narrative, the LDS Church has been compelled to take steps to address the seriousness of the problem.

One of the first responses, which was unannounced, was a one-word change to the Introduction page in 2006.  Up to that time, it read: “After thousands of years, all were destroyed except the Lamanites, and they are the principal ancestors of the American Indians.”  Now it reads: “and they are among the ancestors of the American Indians.”  This change appears problematic, as the Book of Mormon itself clarifies the New World lands to be uninhabited except for the Jaredites, Muulek, and the family of Lehi (see Ether 2:7 and 2 Nephi 1:5-9).  The Church is playing down something that all Mormons accepted as a known fact until irrefutable DNA evidence proved otherwise.

In 2014 the LDS Church released a Gospel Topic Essay titled: The Book of Mormon and DNA Studies (see attached).  The essay demotes the Book of Mormon people to minor players in the continent’s gene pool by stating that they were not the “principle ancestors” but now considered “among the ancestors.”

The Introduction goes on to state about the Book of Mormon: “It puts forth the doctrines of the gospel, outlines the plan of salvation, and tells men what they must do to gain peace in this life and eternal salvation in the life to come.”  However, those “doctrines of the gospel” are not taught in the Book of Mormon.  Those doctrines were developed later in Mormonism as they were taught by Joseph Smith.

Back to the Introduction.  “After Mormon completed his writings, he delivered the account to his son Moroni, who added a few words of his own and hid up the plates in the Hill Cumorah.”  Which is in Manchester, New York.

“On September 21, 1823, the same Moroni, then a glorified, resurrected being, appeared to the Prophet Joseph Smith.”

In his statement, Joseph said that “a man would get nearer to God by abiding by its precepts, than by any other book.”  What precepts would bring you closer to God than what is found in the Holy Bible?  There are none.  Every precept you need to know is contained in the Bible.

The Introduction finishes by stating: “We invite all men everywhere to read the Book of Mormon, to ponder in their hearts the message it contains, and then to ask God, the Eternal Father, in the name of Christ if the book is true.  Those who pursue this course and ask in faith will gain a testimony of its truth and divinity by the power of the Holy Ghost.  Those who gain this divine witness from the Holy Spirit will also come to know by the same power that Jesus Christ is the Savior of the world, that Joseph Smith is His revelator and prophet in these last days, and that The Church of Jesus Christ of Latter-day Saints is the Lord’s kingdom once again established on the earth, preparatory to the Second Coming of the Messiah.”

All I can say to this statement is – please be careful not to rely on your feelings and emotions in discerning truth. 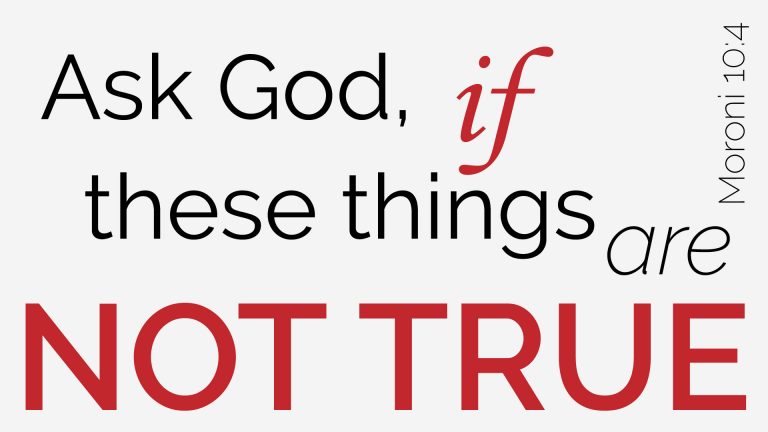 Holy Ghost or Elevation Emotion – Part 1 – Moroni 10:4
Is praying as explained in Moroni 10:4 to know if the Book of Mormon is true or not, the correct way for a person to know truth? Are we to rely upon our feelings and emotions to determine truth? Or, is the best approach to knowing if something is right, is to use the Bible as the standard of truth?
Learn More 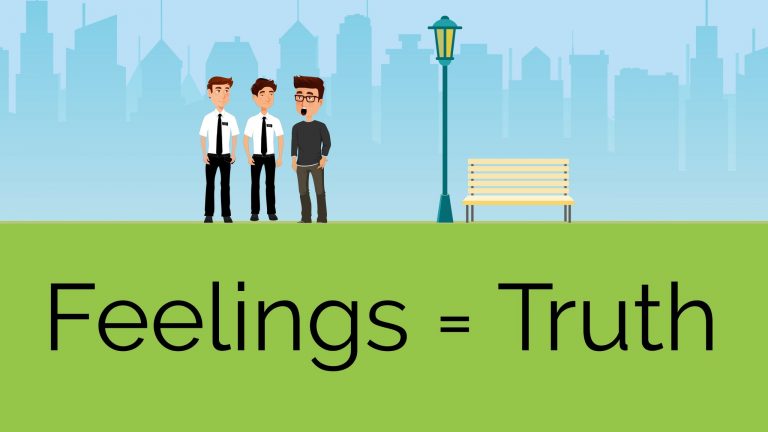 There is nothing wrong in praying for truth (John 8:32), but the answer to truth is never based on feelings.  Scripture tells us “the heart is deceitful” and cannot be trusted (Jeremiah 17:9).  Like Elder Holland said, truth is based on facts and the facts will prove that the teachings and works of the Joseph Smith are either authentic or fabricated.  He is either a true prophet or a false prophet.  We need to realize that our feelings can also be influenced by false spirits.  The Bible says at 1 John 4:1 “believe not every spirit but try the spirits whether they are of God: because many false prophets are gone out into the world.”  So how can we test the spirit of Mormonism and the claims of the prophet Joseph Smith?  The Bible says at Isaiah 8:20 “To the law and to the testimony: if they speak not according to this word, it is because there is no light in them.”

And this concludes the first part of the lesson covering the Introductory Pages to the Book of Mormon.   Don’t forget we are on YouTube, iTunes podcast, Spotify podcast, and check out our website at Talking to Mormons.com.

Learn more in the links below.  Included are the lesson notes.

Until next time, God Bless!